This study demonstrates that Acutrak 2 maintained greater compression than the DePuy Synthes screw in testing. 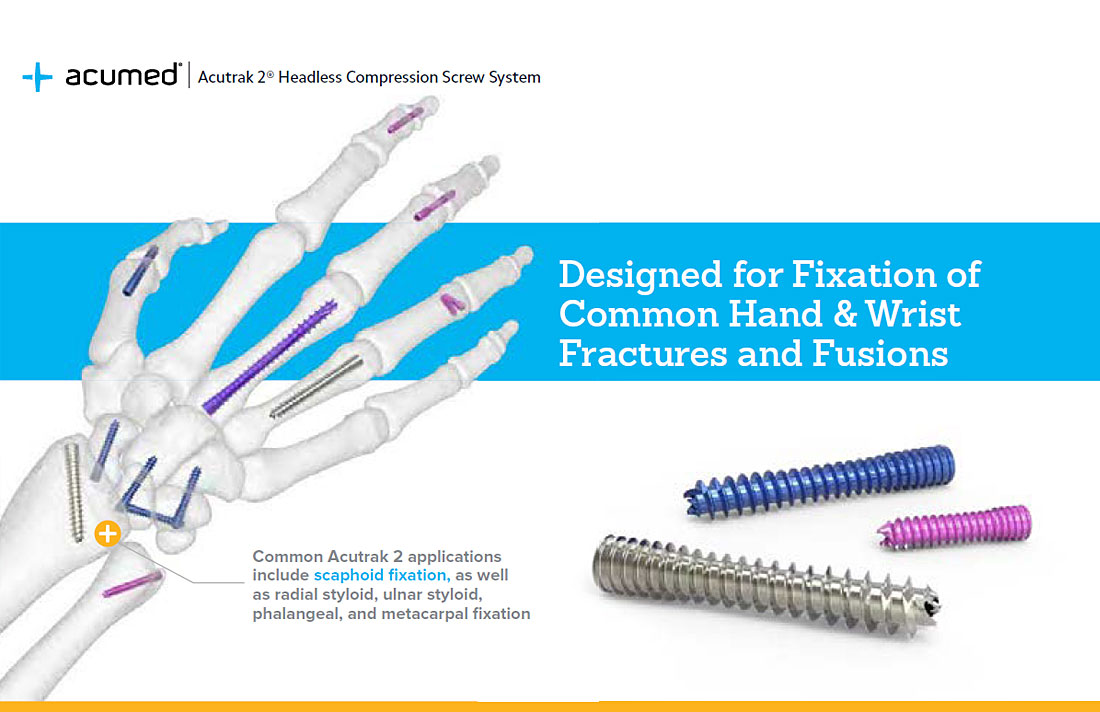 Acumed is one of the few companies to oer a specialized plate designed specifically for fifth metacarpal neck fractures, commonly referred to as “boxer” fractures. 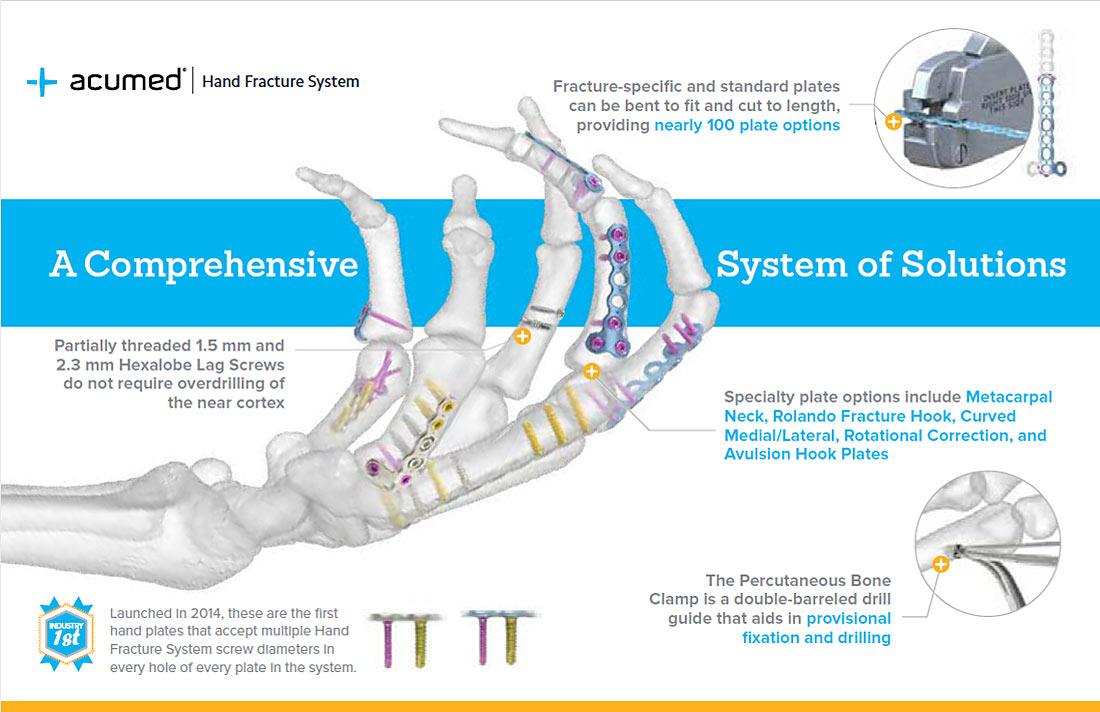 Post-amputation of his thumb, a 38-year-old male opted for metacarpal lengthening with the Acumed Small Bone Distractor to create a thumb that could allow pinch and grasp.

Thumb amputation is a devastating injury that results in significant disability. The surgical options for the creation of a new thumb depend upon the level of amputation.... In this case, the patient elected to have a metacarpal lengthening. The procedure is performed using the Acumed Small Bone Distractor. The device allows for 3 cm of lengthening which was enough for this patient to achieve an opposable post.
HNW70-08
View product web page 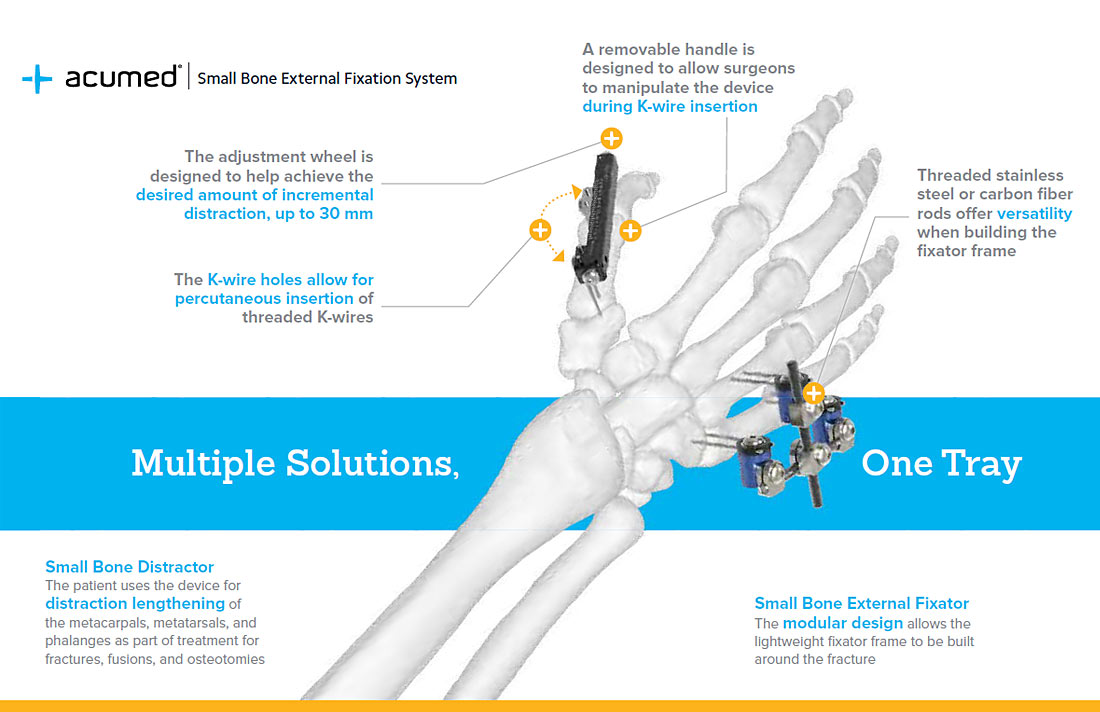 This study evaluates outcomes of intra-articular distal radius fractures with displaced dorsal lunate facet fragments treated with a combination of volar plating (Acu-Loc 2 VDR) and the use of a dorsal screw (Frag Loc Compression Screw) that integrates into the plate. 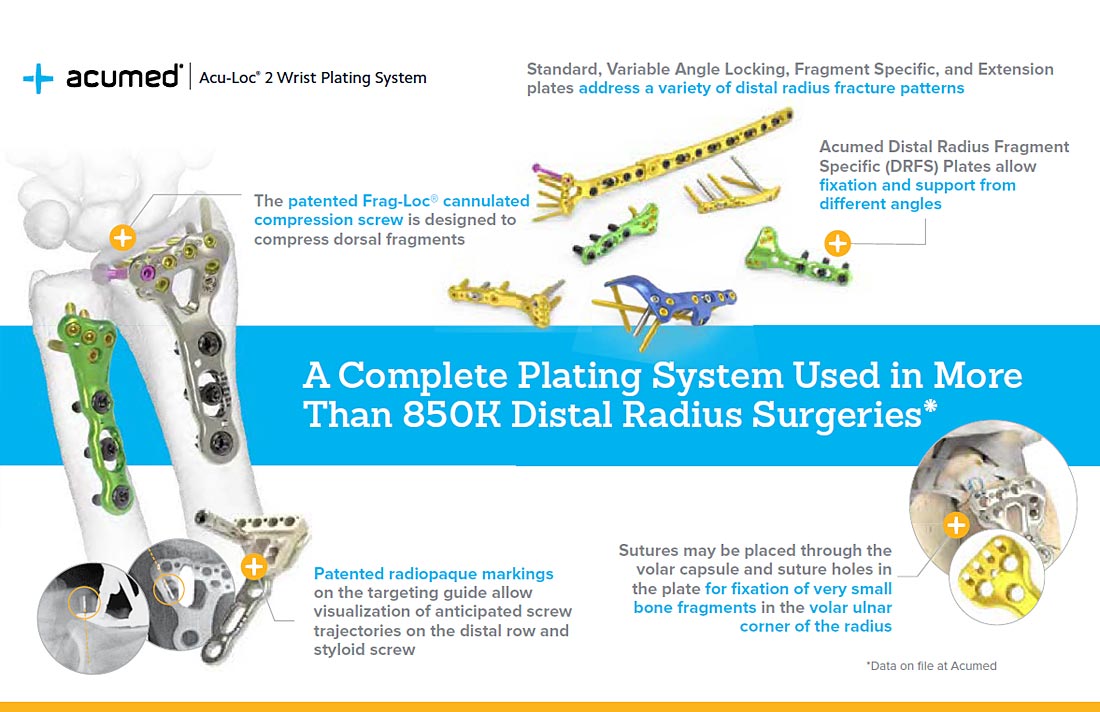 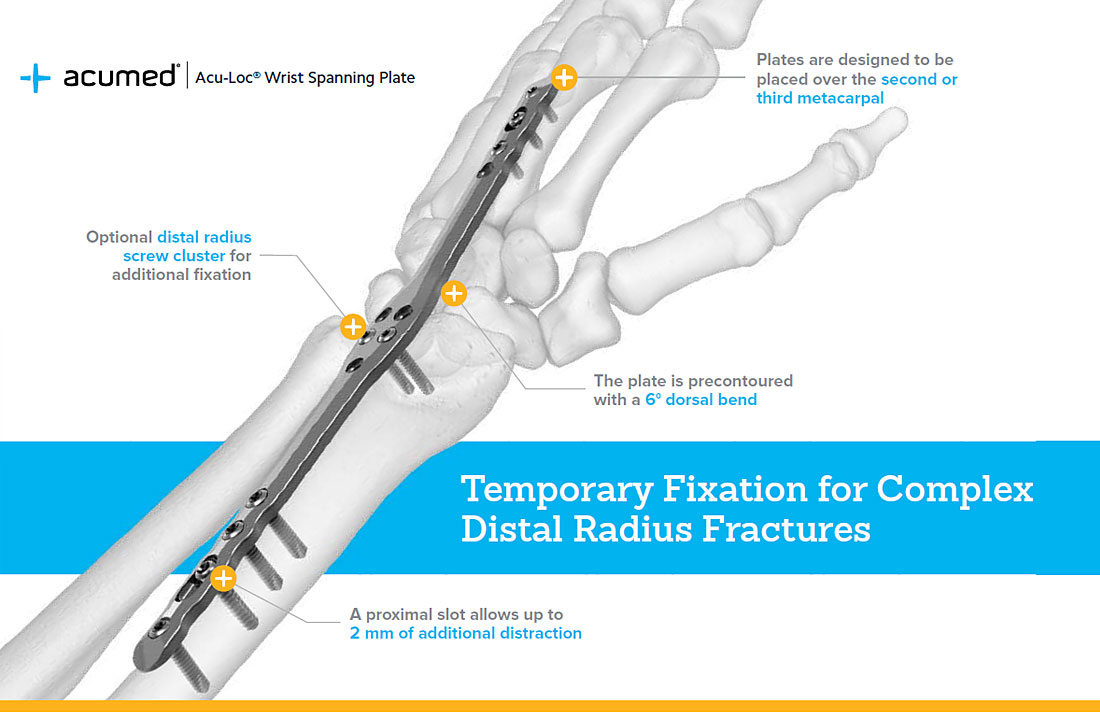 “Once the K-wires are placed into the scaphoid, the wrist is then resuspended in the traction tower. The arthroscope is then placed in the MCU portal. This allows the surgeon to look across the wrist to better judge the rotation and reduction of the scapholunate interval as the K-wires are advanced.”
Geissler WB. Arthroscopic management of scapholunate instability. J Wrist Surg. 2013;2(2):129-135.
View product web page 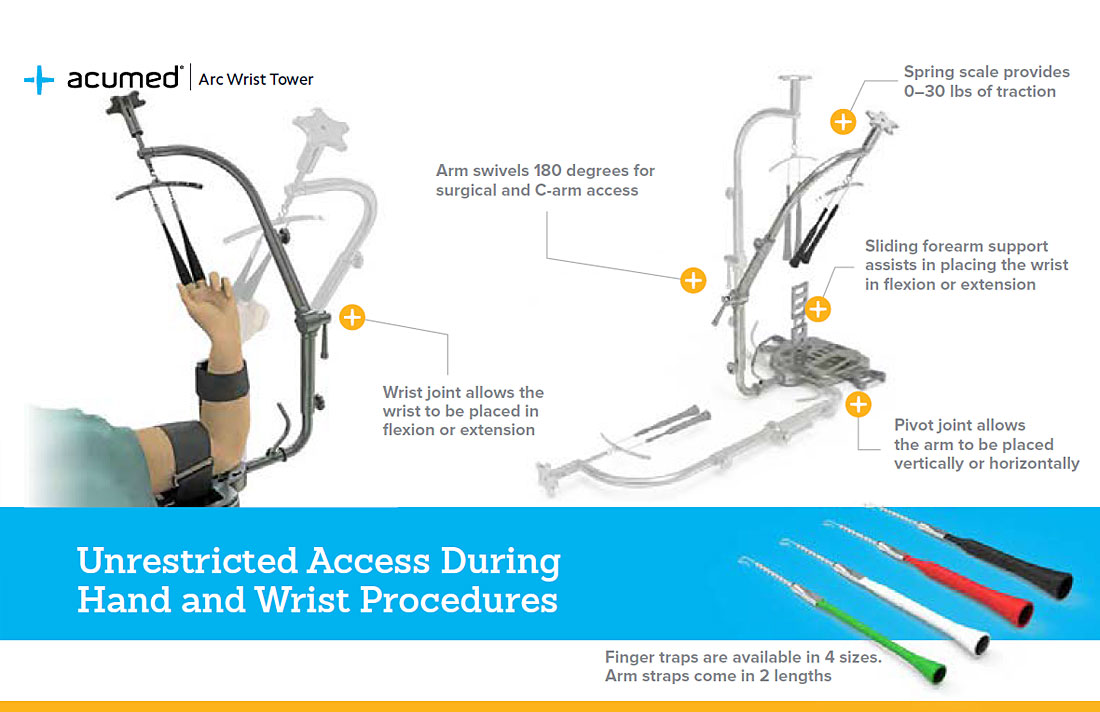 Wrist arthrodesis significantly alters wrist function, but is an option for patients with unremitting wrist pain. Acumed’s Total Wrist Fusion plates place the wrist in 15 degrees of extension and 0–10 degrees of ulnar deviation, a position that is intended as a balance between anatomic resting position, hand function, and grip strength.

“The number of operations performed prior to the wrist total fusion (seven of these being unsuccessful limited wrist fusion after treatment for scaphoid non-union) is interesting. It may be that total wrist fusion should be performed earlier for these problems rather than limited carpal arthrodesis, which will inevitably result in total arthrodesis at a later date.”

“Pryce (1980), in a very complete study, showed better grip strength both in 15° extension and 15° ulnar deviation, than in neutral in both planes.” 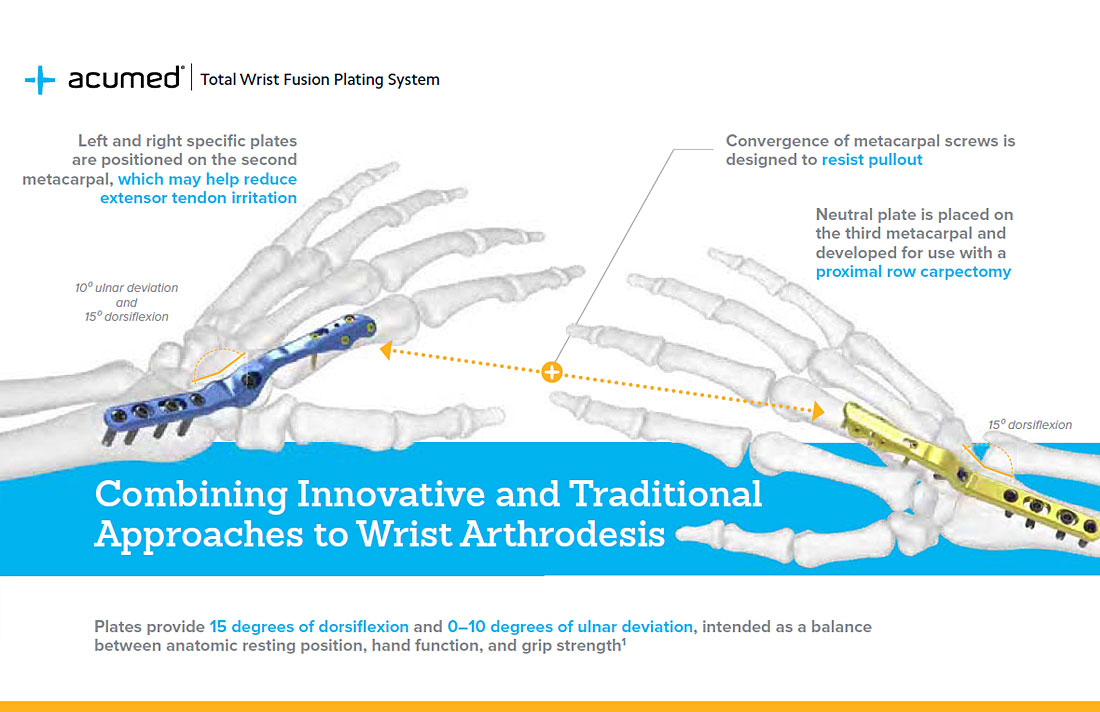 Publication: Radius Morphology and Its Effects on Rotation With Contoured and Noncontoured Plating of the Proximal Radius

The Anatomic Midshaft Forearm Plating System allows surgeons to restore the natural curvature of the proximal radius through the application of a precontoured plate. Restoration of native geometry is crucial to reestablishing patient range of motion and overall forearm pronation and supination.

“This study has shown a significant sagittal bow of the proximal shaft of the radius. Plating this with contoured plates in the sagittal plane improves rotation when compared with straight plates. Additional ulna plating is not a source of reduced forearm rotation.”
1. Rupasinghe SL, Poon PC. Radius morphology and its effects on rotation with contoured and noncontoured plating of the proximal radius. J Shoulder Elbow Surg. 2012 May;21(5):568-573.
View product web page 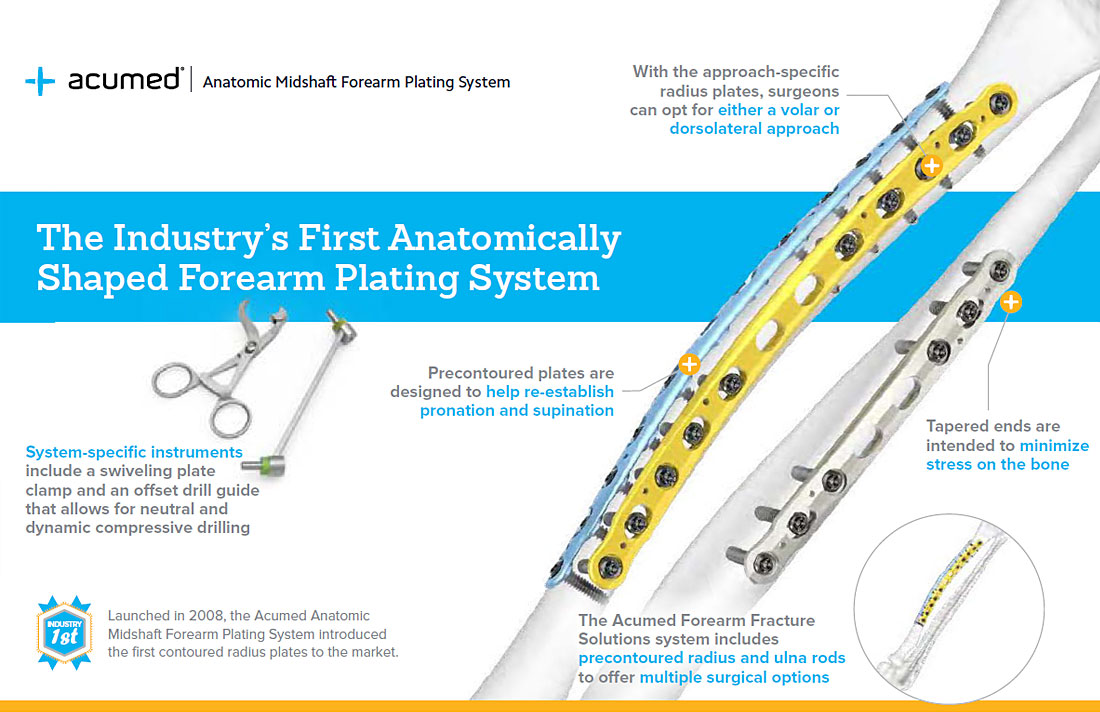 The advantages of an interlocking intramedullary nail system are that it is technically straightforward, it allows a high rate of osseous consolidation, and it requires less surgical exposure and operative time than plate osteosynthesis. 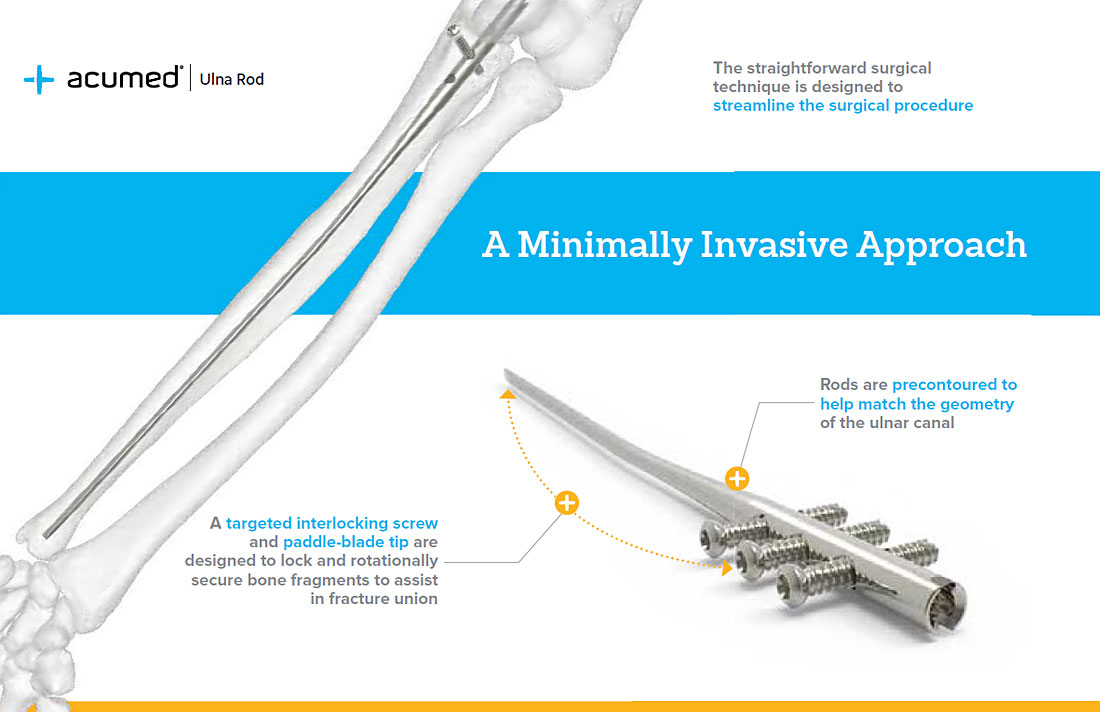 “The rationale being that the TO [Transverse Ostetomy] involves making bony cuts freehand and must be perfectly parallel to each other. The OO [Oblique Osteotomy] made using a dedicated instrumentation system allows a reliable technique for the bony cuts. Theoretically, the OO may provide more surface area for bone healing and better union rate than the TO.”
Singhal R, et al. A study comparing the outcomes of transverse ulnar shortening osteotomy fixed with a DCP to oblique osteotomy fixed with a procedure specific plate. J Hand Surg Asian Pac. Vol. 2020 Dec;25(4):441-446.
View product web page 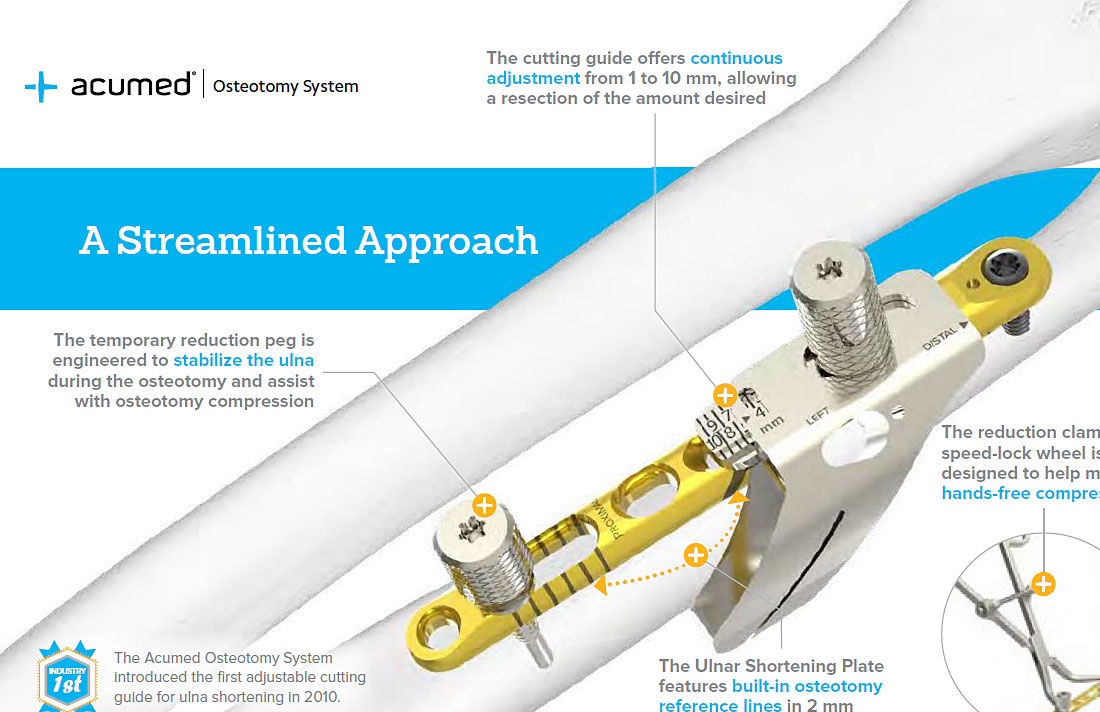